People who deeply grasp pain or happiness of others, process music differently in brain 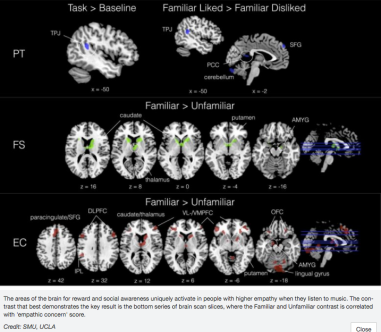 “The researchers found that compared to low empathy people, those with higher empathy process familiar music with greater involvement of the reward system of the brain, as well as in areas responsible for processing social information. […]

Highly empathic people process familiar music with greater involvement of the brain’s social circuitry, such as the areas activated when feeling empathy for others. They also seem to experience a greater degree of pleasure in listening, as indicated by increased activation of the reward system.

“This may indicate that music is being perceived weakly as a kind of social entity, as an imagined or virtual human presence,” Wallmark said.

Researchers in 2014 reported that about 20 percent of the population is highly empathic. These are people who are especially sensitive and respond strongly to social and emotional stimuli.

The SMU-UCLA study is the first to find evidence supporting a neural account of the music-empathy connection. Also, it is among the first to use functional magnetic resonance imaging (fMRI) to explore how empathy affects the way we perceive music.

The new study indicates that among higher-empathy people, at least, music is not solely a form of artistic expression.

“If music was not related to how we process the social world, then we likely would have seen no significant difference in the brain activation between high-empathy and low-empathy people,” said Wallmark, who is director of the MuSci Lab at SMU, an interdisciplinary research collective that studies — among other things — how music affects the brain.

“This tells us that over and above appreciating music as high art, music is about humans interacting with other humans and trying to understand and communicate with each other,” he said.

This may seem obvious.

“But in our culture we have a whole elaborate system of music education and music thinking that treats music as a sort of disembodied object of aesthetic contemplation,” Wallmark said. “In contrast, the results of our study help explain how music connects us to others. This could have implications for how we understand the function of music in our world, and possibly in our evolutionary past.”

The researchers reported their findings in the peer-reviewed journal Frontiers in Behavioral Neuroscience, in the article “Neurophysiological effects of trait empathy in music listening.”

The co-authors are Choi Deblieck, with the University of Leuven, Belgium, and Marco Iacoboni, UCLA. The research was carried out at the Ahmanson-Lovelace Brain Mapping Center at UCLA.

“The study shows on one hand the power of empathy in modulating music perception, a phenomenon that reminds us of the original roots of the concept of empathy — ‘feeling into’ a piece of art,” said senior author Marco Iacoboni, a neuroscientist at the UCLA Semel Institute for Neuroscience and Human Behavior.”