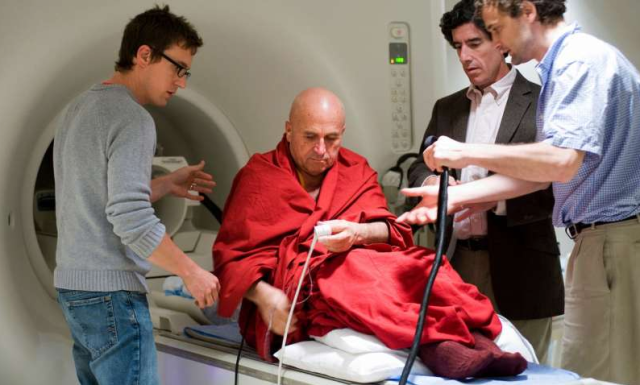 “Both long-term practitioners and new meditators – when compared to non-meditators – showed reduced activity in the amygdala when they viewed emotionally-positive images. The amygdala is an area of the brain critical for emotion and detecting important information from the environment.

The researchers also found that more experience with meditation practice on retreat among long-term meditators was associated with reduced activity in their amygdalae when viewing negative images. While reductions in reactivity to positive images were seen with across all levels of training, this indicates that modulating reactivity to negative emotional challenges requires more training.

She adds that lower activity in the amygdala in response to negative images was a general trend across meditators, but was strongest and most significant in long-term meditators with more intense retreat experience.

In addition, the team discovered that, following eight weeks of training, people new to meditation showed an increase in connectivity between the amygdala and an area of the brain that supports executive function (which includes self-regulation and goal tracking) and emotion, the ventromedial prefrontal cortex.

This was not seen in long-term meditators, perhaps because emotion regulation becomes more automatic with increased practice, the researchers surmise.”

via Meditation affects brain networks differently in long-term meditators and novices
picture credit: Jeff Miller (from the article mentioned above)